Royals blowout Giants to tie up series - Fueled by Sports 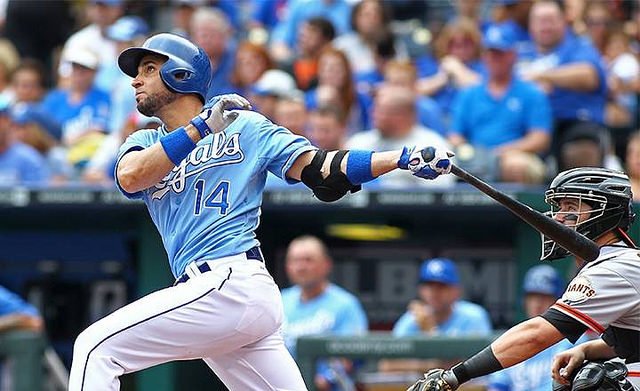 The Royals blewout the Giants 10-0, to tie up the series at three games apiece.  The last World Series to go to a seventh game was in 2011, when the Cardinals came back down 3-2, to win the series.

Kansas City had a big seventh inning scoring seven runs on eight hits and had 12 batters come to the plate.  Only four other teams in World Series history have recorded eight hits in an inning.  All four of those teams went on to win the World Series.

Mike Moustakas hit a homer in the seventh off of Hunter Strickland, ending the Royals 36-innings homeless streak, which was the longest in the World Series since 1945.   Moustakas finished with with two hits and two RBIs.

Lorenzo Cain added three RBIs for the Royals, with two coming in the second innings and the other coming on a ground rule double in the third.  Eric Hosmer hit a double in the second, driving in two runs.  Six different Kansas City players drove in a run and every starter had a hit, with six having two hits.

Yordano Ventura pitched a gem for the Royals, going seven innings and only giving up three hits.  He did walk five though, but besides that he was phenomenal.  Jason Frasor pitched the eighth inning, giving up two hits and Tim Collins  just one hit in the ninth.

Jake Peavy pitched 1 1/3 innings, giving up five runs on six hits.  Every Giants pitcher gave up at least one run except Ryan Vogelsong, who pitched the ninth.

The Giants finished the game with six hits and left 10 base runners on base.  The last time that San Francisco was shut out in the World Series was in Game1 of the 1989 series against the Oakland A’s.  The Giants have been to four World Series since that year.

Hunter Pence got the Giants only extra base hit, with a double in the second off of Ventura.

Guthrie said this about pitching in Game 7 “My memories of a Game 7 probably go back to Jack Morris, `91,” he said. “I was 12 years old, so certainly could appreciate the effort that he gave and the magnitude of the game, to be able to pitch like he did and win the World Series.”

Tim Hudson is pitching in his first World Series and at the age of 39 doesn’t have many more chance to win one.  I wonder if this could potentially be the last time we see Hudson take the mound.  Hudson will bring his A-game and I hope to see a memorable Game 7.

The Royals are definitely the favorite, with home teams being 23-3 in Game 6 and 7 since 1982.  The Royals won their last World Series in 1985 by winning Game 6 and 7 and there is a chance it could happen again.  No team has recovered from losing Game 6 on the road since the 1975 Cincinnati Reds at Boston’s Fenway Park.  Teams with home field advantage have won 23 of the last 28 World Series, including five in a row.