Royal Rewards! Royals Blast Past the O's in Game 1 of ALCS - Fueled by Sports 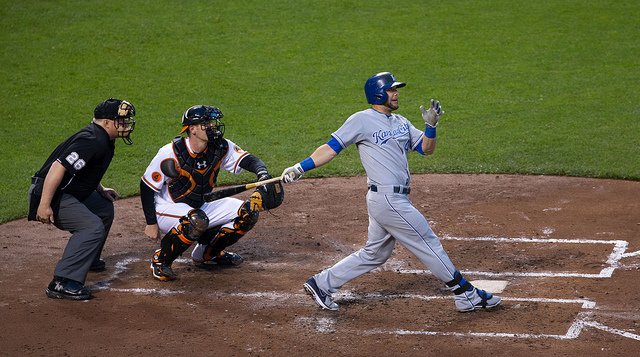 Alex Gordon by Keith Allison is licensed under CC by 2.0

The magic won’t stop!  This post-season run has been incredible so far as we have watched the Boys in Blue win one game after another in an incredible fashion.  Alex Gordon and Mike Moustakas crushed two homeruns in the 10th that put the Royals in position to take Game 1 of the ALCS. After giving up a 5 – 1 lead, the Royals stuck around long enough to work their magic again and win their 4th extra-inning game of the postseason in an 8-6 victory.  Some of this credit should go to Royals shortstop Alcides Escobar who only hit his third homerun tonight in the third inning.

Can we expect this Royals team to end a 28-season drought of the Royals abstaining from the World Series?  Logic says that the Royals lineup is built for consistency and endurance, not an explosive opportunist that they have shown to be in the past few weeks.  This team has potential, but let’s wait for the smoke to clear before we count out the Orioles, who are also looking to end a drought of 30 years without an appearance World Series.

Looking ahead to Game 2, Royals rotate to RHP Yordano Ventura (14-10, 3.22 ERA, 1.295 WHIP) against the O’s and RHP Bud Norris (15-8, 3.65 ERA, 1.216 WHIP).  The Royals will want to continue the great defensive outings that we have seen lately, as the O’s star first baseman, Chris Davis (left off of the ALCS Lineup due to his prior suspension for amphetamines) will reduce the long-ball threat for the O’s.  Be sure to share the love to America’s past time and flip over to Game 2 of the ALCS at 4pm ET in-between football games tomorrow.

O’s even up the series 1-1 Saturday afternoon as Bud Norris causes a hiccup for the Royals and their postseason magic.