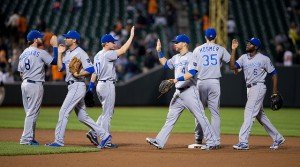 Kansas City Royals by Keith Allison is licensed under CC by 2.0

Los Angeles got off to quick start with a solo home run by Mike Trout in the first inning.  That was the first and last lead that the Angels would have in the series.  Albert Pujols also hit a home run for Los Angeles and Erick Aybar went 4-4.  The Angles had eight hits and left eight on base.  For a team that had the best offense during the regular season, they sure did struggle to get runs home.  C.J. Wilson went 2/3 of an inning for the Angels, it was the shortest outing by an Angel pitcher in their history.  Wilson gave up three hits, three runs, and walked one.  Manager Mike Scioscia made the smart move taking him out, he wasn’t performing and this was an elimination game.  Seven more pitchers would come in and give up a combined five runs and six hits.  The Angels are in a very competitive division and will need to make some moves this offseason if they want to get back to the playoffs next season.  Look for them to go after pitching, with them emphasizing the bullpen.

Kansas City had a great performance from James Shields, he went six innings giving up six hits and two runs.  The great Kansas City trio came in and closed down the game in the final three innings.  The Royals hit two home runs tonight off the bats of Eric Hosmer and Mike Moustakas.  Both players had a great series, each hitting two home runs.  You can tell that Hosmer is a great leader and he will be a key for them in the ALCS.  It will be interesting to see how these two players hit in Baltimore.  Norichika Aoki went 3-3 and scored two runs.  Hosmer is the player of the ALDS in my eyes, with Moustakas coming in a close second.

The Royals will travel to Baltimore to take on the Orioles on Friday in Game 1 of the ALCS.