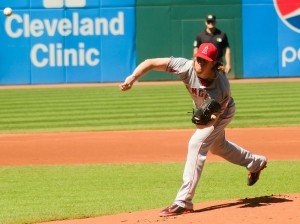 Cleveland Indians vs. Los Angeles of Anaheim by Erik Drost is licensed under CC by 2.0

The Angels finished the season with the best record in baseball at 98-64.  They will face the American League Wild Card Winner, the Kansas City Royals who have been the most exciting team to watch this season.  Kansas City is coming off one of the more exciting games in postseason in history in their 9-8 win over the Oakland A’s.

The Angels last played the Royals on June 29, the two teams split the six game season series.  Both teams are a lot different than they where at the beginning of the season.

Here’s my breakdown of the series.

The Angels have had a rough season with their pitchers, first Tyler Skaggs went out with a forearm injury and was lost for the season.  To make matters worse, Garrett Richards who was having a break out season went down with a knee injury.  The good news is that Jared Weaver is still pitching like the ace he is.  Weaver lead the American League in wins with 18, he also had a 3.59 ERA and 169 strikeouts.  The Angels always play better when Weaver is on the mound, he is the veteran player that everyone looks up to.  Weaver is one of four players left from the last Angel team to make the playoffs in 2009. 28 year-old rookie Matt Shoemaker (16-4), will start game two for the Angels, with the struggling veteran C.J. Wilson starting game three.  If there is a game four Weaver will more than likely be the starter.

James Shields will have to wait till game three to pitch again, so the Angels will have somewhat of a break to start the series.  The Royals will start Jason Vargas in-game one, he is 11-10 with a 3.71 ERA, and 128 strikeouts.  Game two for Kansas City will go to Yordano Ventura, who finished the season 14-10 with a 3.20 ERA.  Ventura gave up the three run home run to Brandon Moss in the sixth inning against Oakland.  If healthy the Angels have the better rotation, but the Royals are better in this matchup.

The Angels have Mike Trout, Josh Hamilton, Albert Pujols, and Howie Kendrick this is without a doubt the best offense in baseball.  They finished in the top 10 in runs scored, batting average, on-base percentage, and slugging percentage.  The ranked first in runs scored, it will be tough for the Royals to slow them down.

The Royals can play small ball better than any team in baseball, and they proved that Tuesday.  Kansas City led the league this season in stolen bases and they haven’t stopped stealing, as they had seven in the Wild Card Game.  The Angels have thrown out base runners 27 percent of the time, which will make this series even more interesting to watch.  The Royals aren’t a very powerful team with Alex Gordon leading the team with just 19 home runs and leading the team with 74 RBIs.  The Royals will have to play small ball to win this series.

The Angels bullpen where a key to their success this season.  Joe Smith, who the Angles signed in the offseason, has been huge for them out of the pen with a 1.81 ERA in 74.2 innings pitched.  Kevin Jespen has been a nice surprise for the Los Angeles bullpen posting a 2.63 ERA in 65 innings pitched.  The Angels had a team ERA of 3.52 this season, which was the 14th best in baseball.

The nice surprise for the Royals has been 21 year-old Brandon Finnegan, who in June was playing for TCU.  He came in and shut down the Oakland offense.  The Royals also have the best 7-8-9 trio in baseball, with the best closer in the American League in Greg Holland. Kansas City had a team ERA of 3.30 and ranked 10th in baseball.

Los Angeles has catcher Hank Conger and Collin Cowgill as the main weapons coming off the bench, both can be utilized either defensively or offensively.  Also watch for Brennan Bosch to come up big in the series, he has a career .263 average in the postseason.

The Royals bench is known for their sped with arguably the fastest guy in baseball in Terrance Gore.  They also boast one of the best base stealers in Jarrod Dyson, and also have Christian Colon coming off the bench.  Colon hit a single, stole a base, and scored the game winning run against Oakland.  I would also watch for Raul Ibanez who’s known for coming up with big hits.

Mike Scioscia is in his 15 season as the manager of the Angels.  He has led them to a division title six times, and to a World Series Championship in 2002.  The last few season haven’t been as pretty for the Angels, who are in the playoffs for the first time since 2009.  Scioscia has a career record of  1,331-1,099, and he owns two AL Manager of the Year awards that he won in 2002 and 2009.

Ned Yost won his first postseason game on Tuesday, but has never won a division title. Yost is 373-402 in the five years he has managed Kansas City.