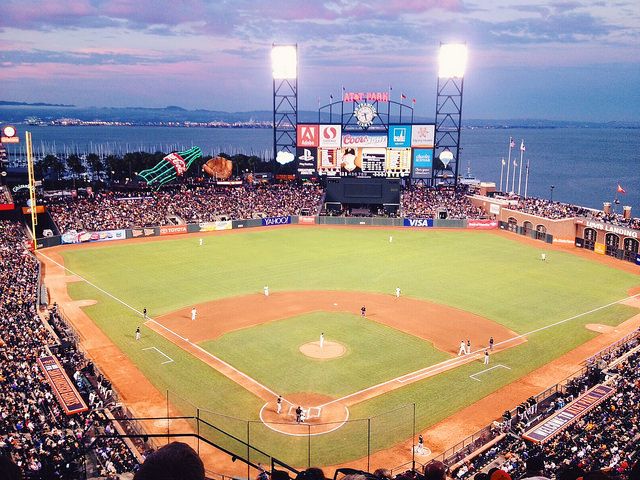 ATT Park by Lisa Suender is licensed under CC by 2.0

The Royals played their usual kind of baseball in their 3-2 win over the Giants, playing a close game and relying on their bullpen to close out the game.  The win gives the Royals a 2-1 series lead over San Francisco.

Jeremy Guthrie pitched five innings for the Royals, giving up two runs on four hits.  The Kansas City bullpen shut down the Giants in the final four innings.  Kelvin Herrera pitched the sixth innings, but ran into trouble early on in the seventh walking Hunter Pence, and was replaced by Brandon Finnegan.  Finnegan was pitching in the College World Series just a few months ago and now is apart of the World Series.  Wade Davis and Greg Holland were their normal self shutting down the Giants.  Finnegan, Davis, and Holland retired eight straight batters to end the game.

The top of the lineup played a pivotal role in the game for the Royals, with leadoff batter Alcides Escobar scoring two runs. Alex Gordon, who batted second for the first time this postseason, scored the other run for Kansas City.  Gordon also had an RBI in the game.  Lorenzo Cain and Eric Hosmer had the other two RBIs for the Royals.

Tim Hudson didn’t pitch a bad game for the Giants, he pitched 5 2/3 innings, giving up three runs on four hits.  The San Francisco bullpen gave up two hits in 3 1/3 innings and keep the Giants in the game.

Mike Morse drove in one of the two runs for the Giants on a double in the sixth inning.  Buster Posey grounded out later in the inning, driving in Morse.

This was a great game and I personally love pitching duals, and hope the rest of the series plays out like this game did.

Game 4 is Saturday at 8:07 p.m. ET on Fox.  Jason Vargas is set to go for the Royals and Ryan Vogelsong is going to pitch for the Giants, but I wouldn’t be surprised to see Madison Bumgarner get the start.  Bumgarner is listed to go in Game 5, but with the Giants down in the series, I think they will want to put their ace on the mound.