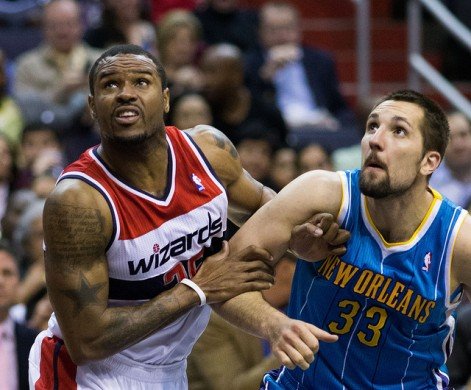 Ryan Anderson by Keith Allison is licensed under CC by 2.0

The New Orleans Pelicans are known for one man, and one man only, and that’s of course Anthony Davis. They are constantly being called a ‘one man team’. Although they have had a shaky first half of the season, they are improving. Anthony Davis is starting to put up some big numbers again, and his unsung sidekick, Ryan Anderson, is also playing an important offensive role.

Last night he scored 32 points in the win against Charlotte. He scored an impressive 63% from the field, draining 6 of 8 three point attempts.

Coming off the bench for the Pelicans, the 6-10 small forward is averaging 17 points, 6 rebounds and 1 assist per game.

The only Pelicans player to be scoring more points each night than Anderson, is of course Anthony Davis.

He has featured in 37 games so far this season, only starting 5 of them.

Anderson is above his career averages. During his 7 year NBA career, he has averaged 12 points, 5.5 rebounds, and 0.9 assists. His numbers this season are improved slightly, particularly his scoring.

Ryan Anderson has to be among the contenders for the ‘Sixth Man of the year’ award, as every night he has come off the bench and consistently loaded up the points for the struggling Pelicans.

The scoring outburst last night set a new season high for him in what was a terrific display on his part.

The Pelicans have a record of 13-26 in the west at the moment, which leaves them 12th in the Western Conference. Compared to last seasons 8th place finish, this is disappointing. On a positive note, if they do finish in this position, they’ll almost certainly have a high draft pick in June, which could be the missing piece of the puzzle for New Orleans. One more young talent could be exactly what they need to push them through to the playoffs, like last season.

Are the New Orleans Pelicans a one man team? Is Ryan Anderson deserving of a starting role? Should Anderson be nominated for sixth man of the year? Tweet me your thoughts @tombonnett2

Tweets by @FuelingSports
Gordon Hayward is underrated, and is leading the playoff charge for the Jazz
Is Russell Westbrook the most complete point guard in the NBA?
To Top
Fueled by Sports