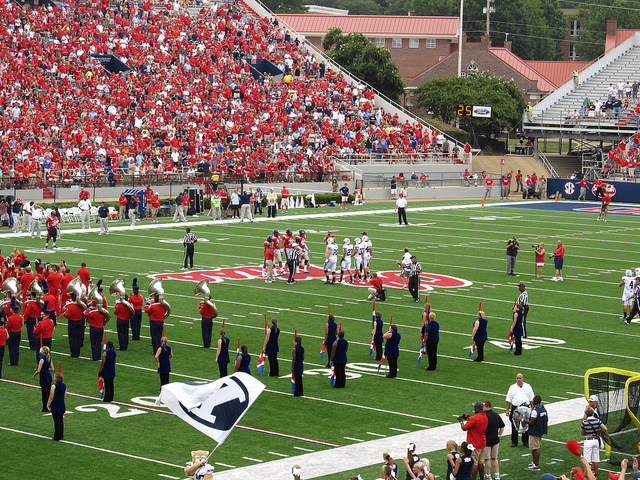 Coin Toss by Ken Lund is licensed under CC by 2.0

Last week we saw Ole Miss undefeated season come to an end, with LSU upsetting the Rebels 10-7.  Ole Miss will host Auburn, who is coming off a 42-35 victory over South Carolina.  The Rebels come into the game with the top ranked scoring defense only allowing 10.5 points per game.  Ole Miss has only allowed 84 points this season and they are the only team that hasn’t allowed over 100.  Auburn comes into the game scoring around 39 points per game and they have been dominant on offense this whole season.  The only two games this season Auburn hasn’t scored 40 points were against top-30 defenses.  The Tigers defense has struggled the past two weeks giving up a combined 73 points, they had just given up 72 in the previous five games.  The Ole Miss offense has struggled at times and will depend on the play of Bo Wallace. Will we get the Bo against Bama or LSU?  If we get the Bama Bo, I like the Rebels chances, but if we get the LSU Bo this game will be over by halftime.  I like Auburn in this game, their offense is just too powerful and the Ole Miss offense will not be able to win a high scoring game.

Florida has been a huge disappointment the past two season and it looks like Will Muschamp will be fired soon.  The only way Muschamp is still the Gators head coach next season, is if they can beat either Georgia or Florida State.  I don’t see that happening, Florida could easily be 1-5 right now.  They should have lost to Kentucky, after the refs missed a delay of game in overtime and they beat Tennessee by one point.  In my opinion, Tennessee beats the Gators if they start Joshua Dobbs.  Getting back to the game against Georgia, the Gators are coming off a much needed bye week.  Georgia was also off last week and have been on a roll lately winning five straight.  The Bulldogs offense has been the most powerful in the SEC this season and is currently ranked 9th in the country.  I look for the Bulldogs to run away with this game, winning 42-14.

Kentucky travels to play Missouri, which could potentially have a huge impact on the east division.  Kentucky is coming off back to back losses against LSU and Mississippi State.  Missouri only conference loss was to Georgia and the Tigers are still very much in the east race, with only one conference loss.  Sophomore quarterback Maty Mauk will be a the key for the Tigers in the game, in their loss against Georgia, Mauk threw four interceptions.  Missouri has a top 25 defense and are allowing around 20 points a game. I expect this game to be a tight one, with Missouri pulling it out in the fourth quarter.

Tennessee hasn’t won an SEC game this season, but I look for that to change this weekend against South Carolina.  The Gamecocks are coming off loss on the road to Auburn and have been the biggest disapointment in the SEC this season.  South Carolina was favored to win the east by many before the season.  Their defense everybody raved about is 100th in the nation right now, allowing 32.8 points per game. Tennessee is coming off back to back losses against top-5 teams and they are very close to big win.  I got Tennessee pulling out a close one on the road.

*Played on at a neutral site