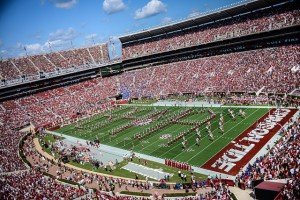 Image by Mike C is licensed under CC by 2.0

I went out on a limb last week and picked Texas A&M to upset Ole Miss and I was wrong.  That game wasn’t even close and I won’t make that same mistake this week, I got #3 Ole Miss handling business at home against Tennessee.  I do think that #3 Ole Miss is on upset alert these next two weeks, but I think that LSU will have a better chance to pull off that feat next week.  The Vols lost their last SEC game to Florida 10-9, and they’ve not been able to find in identity on offense, but don’t be surprised if this game is closer than the experts think.

#21 Texas A&M at #7 Alabama is the SEC game of the week.  Alabama has struggled the last two weeks offensively, but I think they get back to form against an awful Aggies defense.  The Crimson Tide will have no problems in this game and win handily.

There are plenty of good games this week, but one I’m really anxious to se is Kentucky at LSU.  The Wildcats are having a great season, and should be undefeated if it wasn’t for a no-call in the Florida game.  I think that Kentucky will get that upset this week and give them some motivation for when Mississippi State comes to town next week.

I think we will see another upset in the #10 Georgia at Arkansas.  The Razorbacks last conference win was over two years ago, on October 13, 2012 against Kentucky.  Arkansas almost pulled off the upset against Alabama and they’re so close to figuring it out.  Georgia got a good defense, but not on the same level of Bama and that big Arkansas offensive line will push them around, I got the Razorbacks in a classic.

Missouri has been great at times and awful at times this season.  This week the Tigers travel to Gainesville to take on the Florida Gators.  Florida has been awful this season, they got blown out by Alabama and blew the game against LSU last week.  I went back and fourth on this pick, but in the end I have to go with the home team, Florida wins a close one.