Splash Brothers combine for 60 against Charlotte, while Green records his 3rd straight triple-double - Fueled by Sports 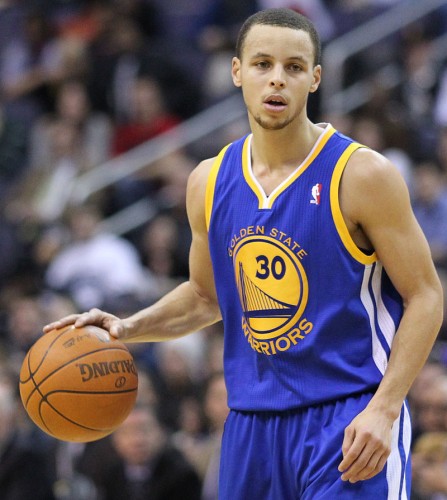 Stephen Curry by Keith Allison is licensed under CC by 2.0

The Golden State Warriors continued their surreal start to the season last night with a win at Oracle at the expense of the Charlotte Hornets, extending their record to 32-2 for the season.

This inter-conference match-up was taken over by Warriors sharp-shooters Stephen Curry and Klay Thompson, who scored 30 points each, combining for over half of the teams points on the night.

Draymond Green also stole the headlines by getting his 3rd consecutive triple-double, taking his tally to an astonishing 7 triple-doubles in just 34 games.

When Stephen Curry made a 3 just 40 seconds into the 1st quarter, we knew we were in for a treat. Curry went 5 for 10 from long range, a strong 50%, which contributed to his 12 of 21 shooting on the night. He finished the game with 30 points, and added 4 assists. He also contributed defensively with 3 rebounds and 2 steals.

Draymond Green became the second Warriors player in franchise history to record 3 consecutive triple-doubles. Charlotte simply could not handle the forward, who finished up with 13 points, 15 rebounds and 10 assists. He also had a steal, and led the team in blocks along with Andrew Bogut, who had 2 each.

Brandon Rush started the game and contributed 10 points; and Marreese Speights provided scoring firepower off the bench, with 15 points from 16 minutes of game time.

The Hornets were competitive throughout, with Kemba Walker leading the charge with 22 points, 7 rebounds and 3 assists. Jeremy Lin had 13, and Jeremy Lamb was hot coming off the bench, he also had 22 points.

So the champs continue their remarkable defense of their crown, while Charlotte’s record moves to exactly 500. They’re 17-17 for the year.

Tweets by @FuelingSports
Draymond Green – On another planet.
The Kings show their potential as they grab their first ever win in Oklahoma
To Top
Fueled by Sports