St. Louis Cardinals are heading to their fourth straight NLCS | Fueled by Sports 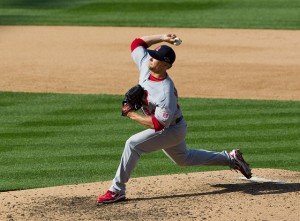 Trevor Rosenthal by Keith Allison is licensed under CC by 2.0

The St. Louis Cardinals are heading to the National League Championship Series for the fourth straight season, beating the Dodgers 3-2.

The Cardinals trailed 2-0 going into the bottom of the seventh, when Matt Adams hit a three run shot to right field off of Clayton Kershaw.  That gave St. Louis a 3-2 lead and they would not lose that lead.

Kershaw continued his postseason struggles pitching six innings giving up four hit and the three run home run to Adams.  Kershaw is now 1-5 in his postseason career with a 5.12 ERA.  He got off to a great start and didn’t give up a hit till the fourth inning.  Kershaw is a great pitcher, but it’s time to start wondering if he can lead a team to the ultimate prize, a World Series.  He’s only 26 and is entering his prime and he will have plenty of  chances to prove himself.  Just remember it took LeBron James, the greatest basketball player in the world, nine seasons.

Shelby Miller pitched a gem for the Cards in his first career postseason start.  Miller went 5 2/3 innings giving five hits and two earned runs, he also walked three and struck out four.  Trevor Rosenthal gave the Cards a scare, walking one and giving up a hit.  Rosenthal was able to get out of the jam unscratched. It was his third save of the series.

St. Louis only mustered four hits today and that was enough to win.  Los Angeles had eight hits and left nine players on base, you can’t expect to win in the playoffs if you leave that many on base.

The Dodgers have one of the best one-two punches in baseball with Kershaw and Zack Greinke and should be right back in the playoffs next season.

The St. Louis Cardinals will face either the Washington Nationals or San Francisco Giants on Saturday.  The Giants lead the series 2-1 with Game 4 tonight in San Francisco.

The Cardinals would love to have a rematch of the 2012 NLCS with the Giants.  The Giants came back to win that NLCS after trailing the Cardinals 3-1.