Steve Nash Out for Season - Fueled by Sports 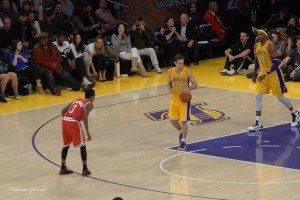 Bucks @ Lakers by Fido is licensed under CC by 2.0

Steve Nash is out for the season with a recurring back injury, the 40-year old Nash was entering his 19 season in the NBA.  Nash, who is the oldest active player in the NBA, has struggled with injures ever since becoming a Laker in 2012.  His replacement will more than likely be Jeremy Lin, who the Lakers acquired this offseason.

Nash was only able to play in three postseason games before he started to feel the pain in his back.  Nash said this about the injury “Being on the court this season has been my top priority, and it is disappointing to not be able to do that right now. I work very hard to stay healthy, and unfortunately my recent setback makes performing at full capacity difficult. I will continue to support my team during this period of rest and will focus on my long-term health.”

Nash is in his final season of his three year contract with the Lakers, he will end up playing in only 65 games during that span.  You almost have to wonder if Nash will call it quits, I know he was wants to win an NBA title, but he will be 41 in February.

Los Angeles made a huge mistake when they went out and got Nash.  The Lakers traded four draft picks for him in 2012, when they were trying to put together a title contender.  Nash’s former team the Phoenix Suns, who the Lakers traded with, will get Los Angeles first and second round picks in 2015.  The first round pick is protected for a top-five pick though.  The Lakers also paid the Suns three million for Nash.

The Lakers owe Nash 9.3 million this season.  In my opinion you should never pay a guy his age that much.  Los Angeles is already without Nick Young for at least the first month.

Lakers general manager Mitch Kupchak said  “As disappointed as we are for ourselves and our fans, we’re even more disappointed for Steve. We know how hard he’s worked the last two years to try to get his body right for the rigors of the NBA, and how badly he wants to play, but unfortunately he simply hasn’t been able to get there up to this point in time. Steve has been a consummate professional, and we greatly appreciate his efforts.”

Nash is currently third and only trails John Stockton and Jason Kidd for career assists.  Nash also has the free throw percentage in NBA history at 90.4 percent.

Nash won two MVP awards in 2005 and 2006 and he was an eight time All-Star.  He stated before training camp that this would probably be his last season.

Steve Nash is one of the greatest point guards of our time, and it’s unfortunate to see this happen to him.  He’s one player I’ve always enjoyed watching and I wish he could have won a championship.

Hopefully we will see Nash again, maybe as an assistant coach or he might go the Jason Kidd route and become a head coach.