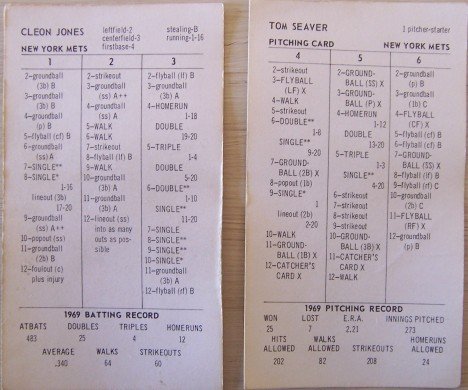 It seems that the great national pastime has been dragged, if not kicking and screaming at least stomping and grumbling, into the age of computers and advanced metrics. But like a grizzled old bullpen coach who grew up before there were batting helmets and hits fungoes every day, Strat-O-Matic is still out there, still played with paper cards and the rolls of dice. Strat-O-Matic was fantasy baseball when fantasies still meant girls.

It was Hal Richman who gave the world Strat-O-Matic baseball. The son of an insurance salesman, Hal grew up on Long Island in the 1950s like thousands of other boys with dreams of becoming the next Mickey Mantle. When it became obvious he was not destined to patrol centerfield for the Yankees young Richman traded his fielder’s mitt for simulation board games. He was never satisfied with what he found so in the great American tradition he devised his own game. He calculated probabilities tossing dice thousands of times in his room  – a task that computers could do billions of times in the seconds it would take Hal Richman to sign his name fifty years ago. Richman shared his game with no and then took it to  Bucknell University with him where he studied mathematics.

By graduation, Richman’s dream of playing major league baseball had been gnawed down to a future in the insurance industry. Facing that grim reality he borrowed some money from his father and started to market his game from his parent’s basement. The loan came with the harshest terms imaginable – if it was not repaid in full Richman would be consigned to a life of actuarial tables in an insurance company.

Richman called his game Strat-O-Matic, directly influenced by the late night hucksters of the time pitching products like the Veg-O-Matic and Chop-O-Matic on television. He started by taking out small ads in the backs of sports magazines and gradually fulfilled enough orders to pay his father back in 1963 when he was 27 years old. Richman never went into the insurance game.

Strat-O-Matic baseball was played with dice, charts and player cards that were based on the previous season’s performances. Each year the cards would change which created a market hungry for the updated cards. Richman’s great contribution to the world of simulated sports games was the introduction of a third die that dictated whether the game result would be determined by the pitcher’s card or the batter’s card. Strat-O-Matic could be played solo or, as the company likes to say, “in friendship-bonding face-to-face play.” Richman expanded his offerings to include historic teams from decades past and branched into basketball and football.

Devotees of the dice-and-card board game are legion. Sportscaster Bob Costas still tells stories of his favorite Strat-O-Matic player card, Gary Geiger, a seldom-used outfielder for the 1966 Atlanta Braves. Daniel Okrent, who created the rules used by millions of fantasy baseball players today, was a Strat-O-Matic fanatic. Another fan was Trip Hawkins who drew on his countless hours of Strat-O-Matic game play to kickstart the sports video game craze when he founded Electronic Arts. Even major league baseball players were known to ring Richman’s office and complain about ratings they had been given on the current cards.

Ultimately Strat-O-Matic drifted online in the age of fantasy baseball. The hockey, basketball and football versions are all more popular online than their board game parents. But not baseball, the last bastion for those who love tradition. Hard core fans still favor shuffling the line-up cards and tossing the dice into the box top, re-creating entire 162-game seasons. They probably also still listen to games with transistor radios in their ears and watch Sports Center on black-and-white television. Strat-O-Matic caters to the traditionalist with its basic game but also offers Advanced and Super Advance and Deluxe versions. When the Hall of Fame forms for fantasy baseball, Strat-O-Matic will go in on the first ballot.