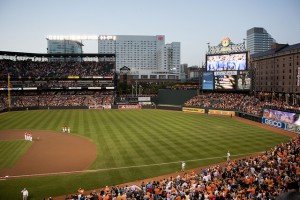 Oriole Park at Camden Yards by Keith Allison is licensed under CC by 2.0

The AL East Champion Baltimore Orioles will square off with the AL Central Champion Detroit Tigers in this best of five series.  Game 1 is Wednesday at 5:37 p.m. ET on TBS.  Chris Tilman (13-6) will go for the Orioles in Game 1, and Max Scherzer (18-5) will go for the Tigers.

Who has the advantage in this series?

The last three Cy Young Winners are on the Tigers in Justin Verlander (2011), David Price (2012), and Scherzer (2013).  Rick Porcello has been a surprise for the Tigers this season going 15-13 with a 3.43 ERA.  Scherzer has a chance to win his second straight Cy Young and has proven that last season was no fluke.  David Price, who struggled most of this season looked good in his last start, pitching 7 1/3 innings and not allowing a run.  Verlander has also struggled this season he went 15-12 with a 4.54 ERA, he will start Game 2 for the Tigers.  Price will start Game 3 and Porcello will go in Game 4.  The Tigers are one of just a few teams with the luxury of four postseason starters.
Baltimore does not have any Cy Young Winners, but they do have a solid pitching staff.  Chris Tillman, who is starting Game 1, was 13-6 this season with a 3.34 ERA.  The Orioles have yet to announce who will start the rest of the games, but you have to figure that Wei-Yin Chen will start Game 2.  Chen was 16-6 with a 3.54 ERA this season.  Bud Norris and Miguel Gonzalez will go Game 3 and 4.  Norris finished the season with a 3.65 ERA and a 15-8 record.  Gonzalez finished with a 10-9 record and a 3.23 ERA. Overall Baltimore doesn’t have the star pitchers that Detroit has, but they have a well balanced staff that will compete.
Advantage- Tigers
Starting Lineup
Detroit offense is known for Miguel Cabrera, but he has plenty of other players around him.  Victor Martinez finished second in baseball with a .335 batting average and he led his team with 32 home runs.  Cabrera didn’t hit like he did the past few season, but was still able to hit .313 this season with 25 home runs, and 109 RBIs.  Detroit had to be shocked with J.D. Martinez performance this season, he had a .315 batting average with 23 home runs and 76 RBIs.  Tori Hunter who is now 39 years-old, had a big season with a .286 average.  Overall, the Tigers have a very good offense and if clicking on all cylinders are the best team in baseball on paper.
The Orioles are going to be without Chris Davis (suspension), Manny Machado (injury), and Matt Wieters (injury) for the series.  The only player of the three that has a chance to return in the playoffs is Chris Davis.  Baltimore has had great seasons from Steven Pearce, who hit .293 with 21 home runs this season.  Before this season, Pearce had never hit over four home runs in a season.  The leader for the Orioles is Adam Jones, who hit .281 with 29 home runs and continued to be a great fielder also.  Baltimore led baseball with 211 home runs, and Nelson Cruz led the team with 40 home runs.
Advantage-Orioles
Bullpen
The Tigers closer Joe Nathan, has struggled this season blowing saves and posting a 4.81 ERA.  Joba Chamberlin has also had trouble at times this season.  He had a 2-5 record with a 3.57 ERA.  Al Albuquerque was a bright side for the Detroit bullpen with his 2.51 ERA.  The Tigers as a team finished 27 in the majors with a 4.29 ERA.
Baltimore has had a great bullpen this season.  Their team finished sixth in baseball with a 3.10 ERA. This was Zach Britton first season as a closer and it looks like he found his calling.  Britton had 37 saves on the season with a 1.65 ERA. Darren O’Day was the eight inning guy for the Orioles and he posted a 1.70 ERA and had 25 holds.  Overall Baltimore bullpen is one of the strongest out of every team in the playoffs.
Advantage-Orioles
Bench
Detroit doesn’t have much of a bench, once Andrew Romine was put in the starting lineup.  Bryan Holaday is their back up catcher, but he won’t play unless something happens to Alex Avila.  Don Kelly is a key for the Tigers he has been one of the better utilityman in baseball, he is not a great hitter, but does have the ability to draw walks.
If it wasn’t for Baltimore bench they wouldn’t be where they are right now.  The Orioles will have Johnny Paredes as their reserve infielder, he has hit well since being trade to Baltimore.  Caleb Joseph will back up Nick Hundley.  Joseph can hit for power, he hit nine in 159 at bats this season.
Advantage-Orioles
Manager
Detroit manager Brad Ausmus is in is first season as a manager, replacing Jim Leyland.  He went 90-72 this season and this is first ever postseason.
Baltimore manager Buck Showalter is in his fifth season as the Orioles manager.  He is 377-328 in those five seasons, this is second postseason with Baltimore.  They won the Wild Card Game in 2012 and lost in five in the ALDS to the Yankees.
Advantage-Orioles
Prediction
Orioles in five