Top 10 Alabama Quarterbacks of All Time - Fueled by Sports 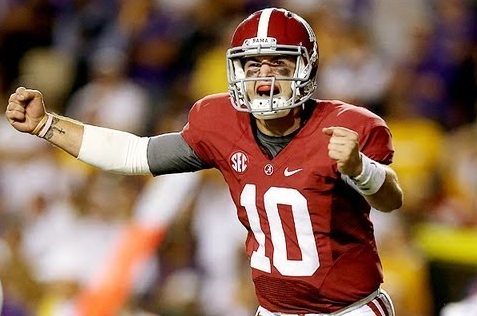 Shealy isn’t often regarded as one of the best Alabama quarterbacks and this might be due to the fact that he played in the wishbone offense. In 1979 he finished tenth in the Heisman voting while only throwing four touchdowns passes and completing just 45 of his attempts. What made him so great was his ability to run the wishbone offense. In his career he finished with 1,393 yards rushing and 11 touchdowns on 269 attempts, while completing 59-of-his-106 passing attempts for just 924 yards, five touchdowns and five interceptions.

He was so good at running the offense that he helped lead the Crimson Tide to the 1979 National Championship, running right through all of their opponents in the process.

Every Alabama fan in the country thought that Coker would be starting for the Tide to open the 2014 season, but Coker was beaten out by senior quarterback Blake Sims, who led the team to a 12-2 season. That proved to be the right move as it appeared that Coker wasn’t ready to take the helm quite yet.

The Tide had a tough time figuring out who their starting quarterback would be in 2015, but it was apparent that the job belonged to Coker after he almost rallied the team to a victory against Ole Miss. The Crimson Tide had decided to start Cooper Bateman, who struggled early and the team fell down 17-3. Coker came in with a little over six minutes left before halftime and immediately drove the team down the field for a touchdown. In the end his efforts weren’t enough as the Tide lost the game, 43-37, but it proved that Coker was the starter.

Coker would go onto lead the Tide to 12 straight wins and a National Championship over Clemson. He finished the season throwing for 3,110 yards on 263 completions and 21 touchdowns. Coker’s 3,110 passing yards are the second most in a single-season by an Alabama quarterback.

Sloan started his career as a back-up for Joe Namath in 1963, and then started off and on in 1964 after Namath went down with an injury. Sloan then led the Crimson Tide to the National Championship the following season, earning All-American honors in the process. He wasn’t the most skilled quarterback, but his ability to lead the Tide to a National Title and also taking over for an injured Namath propelled him on my list.

McElroy, like so many other Nick Saban quarterbacks, knew how to manage the game. He wasn’t the most talented QB, but he knew how to win. He finished his career at Alabama 24-3 record as a starter. Most people probably don’t consider McElroy to be one of the best QBs in school history, but you have to give credit to the man who helped lead the Tide back into prominence.

Trammell was without a doubt one of the greatest quarterbacks of his generation. He might be best known for being the quarterback that started the incredible Paul “Bear” Bryant era, leading the Tide to a 26-2-4 during his time in Tuscaloosa. Trammell earned All-American honors in 1961, while guiding Alabama to their first National Title in 16 years.

Stabler wasn’t the most physically talented quarterback to ever suit up for the Crimson Tide, but the “Snake” sure knew how to win, going 19-2-1 as a starter. In his first season as the starter in 1966 he led the Tide to an 11-0 record, but the team was snubbed by the voters and ended up finishing third in the final rankings. He’s probably most know for the “Run in the Mud,” where he took off for a 53-yard touchdown against Auburn to give the Crimson Tide a 7-3 win in the 1967 Iron Bowl.

Stabler finished his career at Alabama completing 180-of-his-303 attempts for 2,196 yards, 18 touchdowns and 18 interceptions. He also ran the ball for 838 yards and nine touchdowns on 265 carries.

Barker is most remembered for leading the Crimson Tide to a perfect 13-0 season in 1992, with Alabama beating the Miami Hurricanes in the Sugar Bowl to give them their first National Championship since 1979. He played two more years after that, finishing with a 35-2-1 record as a starter, and winning the Johnny Unitas Golden Arm Award and also earning a spot on the All-American team as a senior in 1994.

Hurts was the first freshman quarterback to start for Nick Saban and immediately got off to a great start, leading the Crimson Tide to a 14-1 record with the only loss coming to Clemson and the National Title game. Hurts rushed for 1,976 yards on 381 attempts and three years at Alabama, while passing for 5,626 yards on 445 completions. Most people will remember Hurts for the way he handled losing his starting job to Tua Tagovailoa. Hurts was 26-2 as a starter at Alabama, starting every game in 2016 and 2017 except one, which was the first game his freshman season.

Gilmer wasn’t just a quarterback, also playing defensive back and returning punts and kickoffs for the Crimson Tide. He finished with 54 total touchdowns during his career at Bama, 26 passing, 24 rushing, two punt returns, a kickoff return and an interception return.

Gilmer finished with a 30-9-2 record as a starter, leading the Tide to 10-0 season and Rose Bowl Championship in 1945. He was also named the MVP of the game. That same year, he led the nation in touchdowns passes (13) and was second in the nation in total offense (1,457).

Namath is easily the greatest quarterback of the Bryant era, leading the Crimson Tide to the 1964 National Title and finished his career with a 29-4 record as a starter. He completed 54.3 of his passes for 2,713 yards, 24 touchdowns and 20 interceptions during his three years in Crimson. He also rushed for 563 yards and 15 touchdowns.

It’s hard to believe that more people don’t consider McCarron the best quarterback in the program’s historic history. He was on three National Championship teams, with him starting in two of them. He finished his career with a 34-3 record as a stater, winning the Maxwell Award, the Johnny Unitas Golden Arm Award and being named as a First-Team All-American in his senior season. McCarron also holds the school record for passing yards (9,019), passing touchdowns (77) and is first (30 in 2012) and tied for second (28 in 2013) in single-season passing touchdowns.

McCarron wasn’t a number one pick or even a first-round pick, but he led the Crimson Tide on one of the greatest runs in school history.