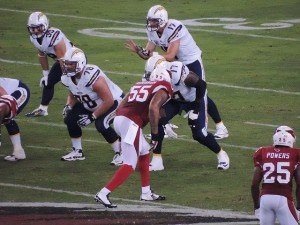 Caleb Jones Week 7 NFL Power Rankings
1. Dallas Cowboys– Going into Seattle and pushing around the Seahawks was impressive. Where did they find that defense?
2. Denver Broncos- Peyton Manning is rolling, but now comes a tough test against the 49ers. Denver has been solid so far this year.
3. San Diego Chargers- Five consecutive victories has the Chargers moving up. They can’t play like they did in Oakland and expect to beat good teams though.
4. Seattle Seahawks- They’ve shown some vulnerability this season. They can’t win with 200 yards of offense like they had against Dallas.
5. Philadelphia Eagles- What we saw against the Giants was the offense we expected to see all season. They head to the bye week in a good way.
6. Arizona Cardinals- Getting Palmer back is big. With Carson Palmer back playing, they are again a serious playoff contender. They have to deal with a lot of injuries on defense, which is tough.
7. San Francisco 49ers- If Colin Kaepernick can play like he did against the Rams, the 49ers will be tough to beat. Now comes a tough test at Mile High.
8. Indianapolis Colts- It’s amazing the rough parts on this team that Andrew Luck covers up. He is in the MVP race.
9. Green Bay Packers- As long as Aaron Rodgers is throwing passes, they are the team to beat in their division. They have to be concerned about the corner injuries though.
10. New England Patriots- It’s funny how much things can change in two weeks. Are they done? Not quite.
11. Cincinnati Bengals- What has happened to the defense? It sure hasn’t looked strong the past two weeks.
12. Baltimore Ravens- Joe Flacco lit up the Bucs and now the Ravens are back on track. The pass rush is really starting to emerge on the defense.
13. Detroit Lions- The top ranked defense in the league is carrying this team. Teryl Austin is doing a heck of a job as the coordinator.
14. Cleveland Browns- They are a surprise 3-2 team. Kudos should go to Pettine for the job he’s doing. Great chance at winning their division.
15. New York Giants- They looked awful in losing to the Eagles, and now must face a brutal stretch of games. They have a big one with the Cowboys this week.
16. Carolina Panthers- Cam Newton is playing great football. The tie in Cincinnati has to feel great though. The defense needs to step up.
17. Kansas City Chiefs- They have to be happy with the way they’ve started. The passing game has to get it cranked up going forward to have a playoff chance.
18. Chicago Bears- That was an impressive road victory against the Falcons. Jay Cutler came up big.
19. Houston Texans- Its to bad J.J. Watt isn’t their quarterback because he is doing it all on the team. Foster has been solid when he is on the field.
20. New Orleans Saints- They were a team that needed a bye to get back to their old ways. But now comes a brutal stretch of games.
21. Pittsburgh Steelers-  They hardly resemble the team we saw late last season. What has happened to this team?
22. Atlanta Falcons- At 2-4 they have a must win game in Baltimore this week. They have problems on their lines. This team had big hopes starting the season.
23. Buffalo Bills- The new owner got off to a tough start with a bad home loss. They just aren’t good enough to beat the Patriots.
24. Miami Dolphins- The loss to the Packers will sting. Ryan Tannehill can’t turn it over like he did in the first half if they are going to win.
25. Minnesota Vikings- Teddy Bridgewater came back to reality in his second start. The Vikings better hope there’s not more of that coming.
26. Washington Redskins- May actually be waiting for RG III to hurry back by now.
27. St. Louis Rams- So much for that solid defense. It just hasn’t happened for this group. Austin Davis looked like Austin Davis against the 49ers.
28. Tampa bay Buccaneers- This team didn’t even show up against the Ravens. That’s not a good sign for Lovie Smith.
29. Tennessee Titans- They found a way to win against Jacksonville with Charlie Whitehurst, but it sure wasn’t pretty. This team needs a lot of help.
30. New York Jets- At 1-5 heading into the Thursday game with Patriots the heat is on Rex Ryan. How much longer can he stay with Geno Smith?
31. Oakland Raiders- They didn’t win against San Diego, but they competed. That’s a good sign. And Derek Carr impressed.
32. Jacksonville Jaguars- They found out they have a real keeper in Blake Bortles at quarterback. Now it’s just about getting better the rest of the way around him.