What next for the Knicks? - Fueled by Sports 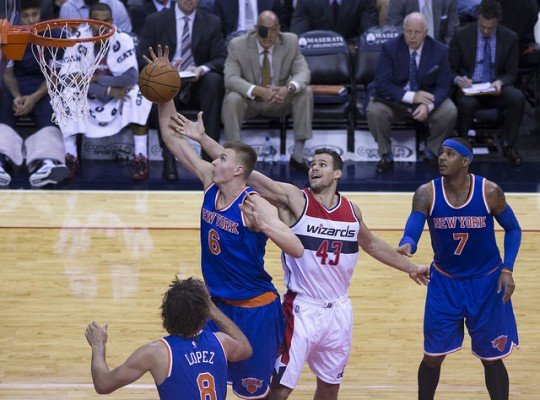 Kristaps Porzingis by Kieth Allison is licensed under CC by 2.0

The New York Knicks are a team that have improved this season. This time last year they finished the season with an abysmal record of 17-65, finishing 14th in the Eastern Conference, only ahead of Philadelphia.

This year, the record looks a little more respectable. With 32 wins and 48 losses with 2 games remaining, there has been improvement. However, the season is yet again ending on a disappointing note, because at one stage the Knicks had an even 22-22 record. Since then they have only managed 1o wins, and lost 26.

Head Coach Derek Fisher was fired in early February, and assistant coach Kurt Rambis took charge until the end of the season, and has done an equally as bad, if not worse job, than Fisher. This week there have been rumours emerging around the league that Knicks president Phil Jackson wants to leave his role and return to the Lakers.

With no draft picks this summer, no permanent head coach, and potentially losing the President of the association, things look like they are beginning to fall apart in New York. So where do they go from here?

Well the most important factor in an organisation is of course the players. One of the Knicks’ few successes this season was drafting 7’3″ Latvian Kristaps Porzingis. He has proved to be a huge talent, and has a lot of time to continue to improve. They also traded Tim Hardaway Jr to the Atlanta Hawks for the 16th pick in the draft last season, where they drafted point guard Jerian Grant from Notre Dame.

Robin Lopez has proved to be the best free agency acquisition for New York, and Knicks fans will have been pleased to see the Center put up some big points this season, taking the pressure off of Carmelo Anthony. Derrick Williams has made the NBA top 10 plays more than his fair share of times this season with some huge dunks, providing energy and points production coming off the bench.

Jose Calderon has failed to impress as the starting point guard, and the Knicks fans have shown their desire to see him replaced moving into next season. Arron Afflalo has had positive moments at shooting guard, but rumors have spread of his unhappiness in New York, and the video of him refusing to high-five teammate Kyle O’Quinn went viral, which didn’t help his cause. He was moved to the second unit in an attempt to bring some scoring firepower to the bench, but this move has provided unsuccessful. Sasha Vujacic has proved to be very inconsistent, and the rest of the bench have had their good and bad moments.

I highly expect second unit members such as Langston Galloway and Kevin Seraphin to be in a Knicks uniform again next season, as well as Derrick Williams. I am expecting some members of the bench to be offloaded however, and I’m sure there will be some changes to the roster over the summer, and will look different next season. Maybe not a complete roster makeover like the 2015 offseason, but change can be expected.

Of course there is Carmelo Anthony, who has led the Knicks in points (21.9), assists (4.2) and rebounds (7.8). Anthony has been the core this season to whom the rest of the team have relied on to score points efficiently.

In my eyes, 3 of next seasons starting 5 are already decided. I expect Carmelo Anthony, Kristapz Porzingis, and Robin Lopez to be starting at the beginning of next season. So that of course leaves the backcourt, where there has been a lack of points production, and in my eyes is where it has all gone wrong.

For the second half of this season, the Knicks have been poor. Knowing that the playoffs were out of reach, they should have given the young guys more opportunities to start games. On friday night, rookie Point Guard Jerian Grant started the game against Philadelphia and had a great game. He scored 16 points, and also had 6 assists and 5 rebounds, playing a big part in the 109-102 victory.

Last week he also started against Brooklyn, and had 14 points and 4 assists in the 105-91 victory. These performances have both resulted in victories for the Knicks, and although they are against weak teams, it still shows that with some more game time, Grant has the potential to be a very good point guard for the Knicks. In my opinion, Coach Rambis should have given up on Jose Calderon a long time ago, and given Grant more opportunities as the season has gone on.

So with 2 games left in the season, and no post-season basketball in New York for yet another year, the future looks uncertain. Names have floated around the league as potential Head Coaches of the Knicks next season, but there continues to be no outright favorite for the role. With no draft picks in this years highly anticipated NBA draft either, the Knicks may well have to rely on free agency in order to bring any joy to the fans in NYC.

Unfortunately, no big names have been linked with New York for this upcoming free agency. With the current uncertainty and no picks going forward to build a future of young talent, big names are turning their heads away from the Big Apple. Mike Conley is the only free agent who has been linked with a switch to the Knicks, however most arrows are pointing elsewhere for the superstars of the draft.

Not all hope is lost however for the Knicks. We saw last year that Phil Jackson isn’t afraid to trade away players for draft picks. So perhaps he has a plan to offload a player or two in order to grab a top 20 pick in this years draft.

Porzingis was the first step to the rebuilding phase of this New York franchise, now they need to take another big step forward this summer. Which step they take however, remains very unclear.