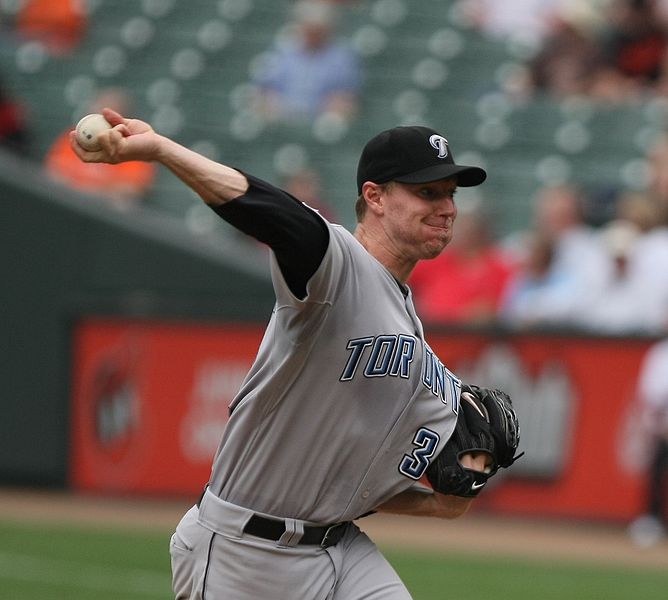 The image of Roy Halladay by Keith Allison is licensed under CC by 2.0

There is no doubt about it. When you look at the long history of the Toronto’s beloved Blue Jays and consider the franchise’s best pitchers… Roy Halladay, number 32, two-time Cy Young Award winner takes the top spot. His only possible contender for the top spot is fellow right-hander Dave Stieb. (Remember that Roger Clemens was with the team only very briefly.)

At 6-feet-6 inches and 225 pounds, Halladay, known as Doc, was an imposing presence on the mound: calm, cool, and collected when the pressure was on. Since his major-league debut in 1998.
He definitely fits into Toronto’s “Franchise Four.” If you haven’t heard the phrase before, it’s part of an effort by Major League Baseball to identify each team’s top four players in their history.

So what was Doc’s best season during the 12 seasons he was with the Blue Jays (before being traded to the Philadelphia Phillies in 2009)? It’s a tough call for a pitcher who had some very dramatic ups and downs during his career.
Two thousand three was a good year, which set the stage for his stellar performance over the next nine years. In 2003, he:

· Three 266 innings (How much does a baseball weigh? Not much. But can you imagine throwing one that many innings!?)

· Threw 204 strikeouts and had only 32 walks (the 6.38 strikeout-to-walk ratio was the best in Majors that year)

· Most of all… he won the Cy Young Award for the American League!

· That year he was Toronto’s opening-day starter for the sixth year in a row.

· He won five games against the Yankees – the first pitcher to do it in a single season since 1974.

· He was the fourth pitcher in the history of the majors to post two seasons of 200 strikeouts and less than 40 walks.

You’ll notice there’s not a playoff game in there, or a World Series mentioned. That’s one of the “black marks” on Halladay’s career and one reason some say he won’t make it into the Hall of Fame. Unfortunately, lackluster teammates, even though they had the best outfield gloves, meant that Halladay, even as he excelled in his individual performance, didn’t see any postseason action as a Blue Jay.

But still he shined during that 2008 season and it kicked off a multi-year run of dominance that lasted until 2011.

As if that wasn’t enough… Here are some of this Denver, Colorado native’s other eye-popping stats and achievements for your consideration:

If anything, Halladay was known for his stamina and strength. As a Blue Jay, he threw 220 innings or more six times.

To be fair, Halladay has had some good years in Philadelphia too, including a no-hitter in the 2010 National League Division Series – his first-ever start in a playoff game and only the second no-hitter ever in league history. But it was his time as a Toronto Blue Jay that he had his real standout years for which he’ll be remembered by fans for decades to come.

One thing to also note about Halladay is his mental toughness and perseverance. After a horrible 2000 season, he was sent by Toronto team management to the minor leagues. This move would have broken most players. But instead, Halladay used this opportunity to strengthen his skills and mental game. Working with pitching coach Mel Queen (who came out of retirement) one-on-one, Halladay was able to gauge how much does a baseball weigh with a stronger more efficient fastball. He was soon back to the bigs. By 2002, he was an All Star, and he won the Cy Young Award the next year.

Roy Halladay is eligible for the Hall of Fame in 2019. He has a solid chance of being inducted. He’s already in the Canadian Baseball Hall of Fame.