Will Amari Cooper win the Heisman? - Fueled by Sports 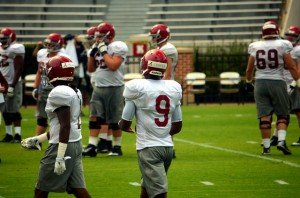 Alabama fall practice by Phillip Hendon is licensed under CC by 2.0

Will Amari Cooper win the Heisman Trophy?  I know it’s early, but Cooper is off to an incredible start.  He is a once in a generation type receiver, and can take over a game better than any receiver we have seen in the last 15 years.  Desmond Howard was the last wide receiver to win the Heisman in 1991, just to put that in perspective, Cooper was born three years later.  Howard caught 62 passes for 985 yards and 19 touchdowns when he won the Heisman.  He also had a kick and a punt return for a touchdown that season.  Through four games Cooper has 43 receptions for 655 yards and five touchdowns.  The record for receiving yard in a season is 2,060 by Nevada receiver Trevor Insley.  If Cooper keeps up the pace, he will be break the record, and it won’t even be close. Alabama opponents will try to double team Cooper, but will be unable to without another Alabama skill player stepping up.

Cooper absolutely owned Vernon Hargreaves III, who is without a doubt one of the best defensive backs in college football.  He struggled with an injuries last season, but still was able to have 736 yards receiving.  Trust me Blake Sims is glad he is back to 100 percent, Cooper has 320 yards after the catch so far this season.  Cooper has made Sims look great so far this season, yes I think Sims is a good quarterback.  If it wasn’t for Cooper, he wouldn’t be having the great season he’s having.  I think Cooper is good enough to win the Heisman this season without returning kicks or punts.  He will more than likely break a few records this season, and win Alabama a few games.

The Heisman trophy should go to the best player in college football, and right now it’s Amari Cooper without a doubt.  He dominated one of the best corners in the game, he has over 130 yards receiving in all four game so far, and just the fact nobody has been as dominant as him.  I do believe that Marcus Mariota is a great quarterback, but I think that Oregon will lose a few game this season.  I think a few losses will cost Mariota the Heisman, and Gurley will have a few bad games.  I think Gurley is a great player, but there are a lot of great running backs in the Georgia backfield. There will be a few games that Gurley won’t get the carries he will need to have that big game.

We have never had a receiver that didn’t play any other position win the Heisman.  That’s why I hope he wins it, I love seeing history be made.  Frankly I’m just tired of quarterbacks and running backs winning the Heisman, no offense to them.

Who do you think will win the Heisman?