Yasiel Puig benched for Game 4 of NLDS - Fueled by Sports 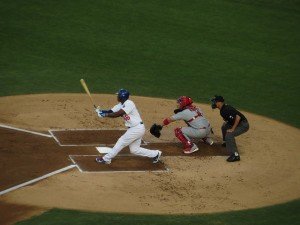 Yasiel Puig by Ken Lund is licensed under CC by 2.0

Dodgers starting Center Fielder Yasiel Puig has been benched for Game 4 of the NLDS against the St. Louis Cardinals.  Andre Either will get the start for the Los Angeles.  Puig has been struggling as of late going 3-for-12 in the series, most of his struggles boil down to fundamentals.  St. Louis has been pitching in on him and I think it has gotten to Puig.

Puig has scored four runs so far in the series, with three of them coming in the Dodgers Game 1 lose.  He’s 1-for-8 in games two and three, striking out in seven consecutive at-bats.  Puig finally ended that streak in the sixth inning Monday night, when he hit a triple.  Adam Wainwright hit Puig with a pitch and Game 1 that caused the benches to clear.  Puig was brushed back by a pitch in Game 2.  Teams haven’t shyed away from pitching him inside, as he was hit by 12 pitches this season.  That is twice as many as any other player on the Dodgers.

Don Mattingly said about Either that he gives Los Angeles “the best chance to win today.”  I believe that is true, nothing against Puig, but he lets his emotions get to him and it has shown.  This is a pivotal game for the Dodgers and they will probably be better off tonight with the veteran Either starting.

Either didn’t play much in September, having only 18 at-bats.  He hit .249 this season and it just four home runs.  Either has a career postseason batting average of .236 and only has four hits in his last 28 postseason plate appearances.